Skip to content
“That’s it! Mission accomplished, team! Twenty eight shows later and we come to the close of Hitler’s Headquarters, inside The Victoria Tunnel.
It has been an amazing show, and we would like to extend our congratulations to the entire cast and crew. And of course thank you to our amazing audiences who made the whole process so very rewarding.
We’ll be back with you shortly…
Here are some lovely pictures from our time in the tunnels… click each thumbnail to expand. 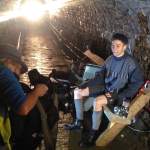 “I brought my father to see the show who had told me in the past he was a young boy down in the tunnels during the War. We had no idea the show would be so though provoking and enveloping. We left feeling elated and rather emotional. Thank you. Thank you. Thank you.”
“It was great can’t wait to see where the next production will be.” Sarah Rose
“So pleased to have experienced the show. An amazing performance and very thought provoking.” Samantha Everitt
***

“Theatre-goers in the region can enjoy a one-off cultural experience beneath the streets of Newcastle this September and October.

‘Hitler’s Headquarters’ will look at real life in Newcastle during some of the most severe bombings of the conflict and tell the stories of families who were made homeless and forced to take shelter beneath the city.

The Victoria Tunnel is a preserved 19th century wagon-way reaching from the Town Moor to the Tyne and in the 1800s was used to transport coal from Spital Tongues Colliery to the river. However, in 1939, the tunnel was converted into an air raid shelter to protect thousands of Newcastle citizens during World War 2.

Twenty Seven Live Ltd has been given exclusive access to perform its play, which can only be staged in front of an audience of 20 people at a time.

Victoria Gibson, producer of Hitler’s Headquarters and Director of Twenty Seven Live Ltd said: “This is a whole new cultural experience for anyone interested in either the North East’s rich heritage or unusual stage productions. It’s nothing like the average play in a regular theatre as the audience will actually feel part of the whole experience- and get to see the magnificent Victoria Tunnel.

“As a production company, Twenty Seven Productions is committed to different and exciting live performances and nurturing the best new talent. We always work to push the boundaries of film and theatre and Hitler’s Headquarters illustrates this perfectly.”

You can watch an ITV News report about the production by clicking here.

Plus we were also featured on the BBC – watch that video here. 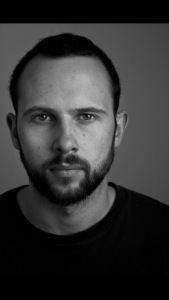 James is a born and bred Geordie lad.

He trained locally at the Newcastle College Performance Academy as well as further training courtesy of: Northumberland Theatre Company in The Northern Region’s Theatre Training Ensemble; InterACT, National Youth Theatre Rep Company (2013) and most recently he was selected as a member of Northern Stage’s actor training initiative North15.

James can’t wait to get stuck in to the huge history of the Victoria Tunnel and hopes he doesn’t step on your toes!

Sally finished her training at Northumbria University in 2009 Graduating with a First Class Honors Degree in Performance. She began her professional acting career later that year working with North East based Theatre Company ‘November Club’, of which she is now an associate Artist. She then spent a further year training at ‘The Actors Class’ (Courtyard Theatre, London) in 2014.

Victoria graduated from Northumbria University in 2011 and moved from Newcastle to London to pursue her acting career.  Victoria’s professional career started with North East Theatre Company, The November Club, as she took the role of Gertrude Bell in ‘Teacups, Zebras and Dancing Kaisers’ and was then invited back to appear in ‘Operation Pied Piper’ the following year, which was nominated for a Journal Culture Award. Victoria has travelled internationally with her career, and has performed alongside the likes of Stephen Tompkinson, Martin Shaw and has developed her own Production Company – Twenty Seven Live Ltd.

Victoria hopes you fall in love with the story as much as she has, and wishes you well on your journey back in time.

Stephen began his performing career at the age of 11 at the School of Rock and Pop academy.  He performed in bands and as a soloist at a range of venues across the north east of England before turning his hand to acting. Stephen trained as an Actor at the Arena North Theatre School, Live Wires acting workshop, Sage Academy and at Newcastle College.

As well as working as an actor and musician, Stephen is a keen Motorcyclist having been involved in speedway racing from a young age. He is also a competent horse rider having ridden regularly from the age of 9.

Stephen is absolutely thrilled to be part of the cast of Hitler’s Headquarters and he would like to thank his family for their continued support.

Jacob is an actor who studied in the North East. Recent credits include playing Hamlet with NE Theatre Space, completed a tour of ‘The Frights’ in association with Alphabetti Spaghetti, and then to screen appearances in ‘Ripper’ and coming soon in a major ITV drama.

He is very excited for the prospect of this project and the interesting history that goes alongside it.